Adding color to buttercream can be really fun, but also stressful at the same time. Not knowing how to correctly color your buttercream can cause it to have an awful taste, and nobody wants that! I actually had to learn the hard way with coloring buttercream, but throughout all of my trial and error, I learned a few great tips that will help any cake decorator achieve their desired color when coloring buttercream.

When it comes to coloring buttercream, it’s best to start with a small amount. By adding a large amount of food coloring to the buttercream on the first try can cause your buttercream to be much darker than you expected it to be. It can alter the taste of the buttercream as well.

Liquid Food coloring can be used to color buttercream, however it can alter the taste and texture if too much is added to your buttercream. 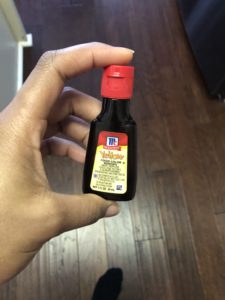 Liquid Food Colorings are weaker in color and have a watery consistency that will not evenly mix together with buttercream because it is oil based. Therefore it’s best to stick with Gel paste food colorings or even powders to color your buttercream.

Tip 3: Use Gel Paste for a even color

The consistency of Gel Paste are much more softer and they tend to blend very will with buttercream. By using Gel Paste Food coloring, you will have a greater chance of getting an even tone without any clumps or streaks in your buttercream. I recommend using a bowl scraper attachment to mix the the gel paste with the buttercream. 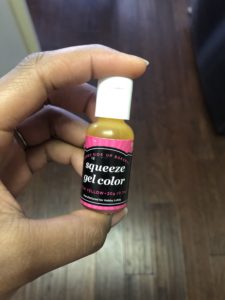 Tip 4: Don’t over mix the Buttercream

When making cakes from scratch, we’re used to hearing that it’s best to not over mix the cake batter because that can change the texture of the cake. Well this factor is true for buttercream as well. Over mixing your buttercream can actually alter it’s texture too. The more you mix the buttercream, the more you will notice air bubble in the buttercream. I can say that I absolutely hate Air Bubbles. 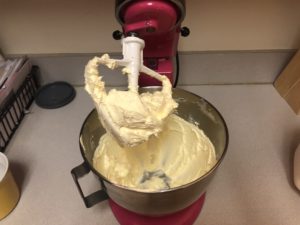 They can also destroy the final look of your cake. You will notice that your buttercream has air bubbles if there’s holes or tiny air pockets left after you’ve smoothed the sides of the cake. Therefore, it’s best to mix your buttercream in 10 second intervals until you have reached the color that you’re going for. As you get better at coloring your buttercream, you will have an idea of how much coloring to add without mixing it several times.

Food Coloring Powders can be added by 1/8 teaspoons at a time until your desired color is achieved. The best part about using the powdered colors is that they will not alter the taste of your buttercream. But you may have to mix them longer to make sure the powder is completely dissolved. 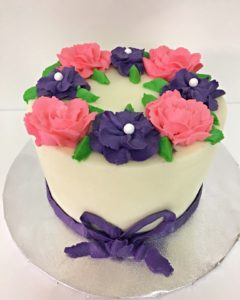 These powders work great for darker colors such as Red, Black, Green, Blue, and Purple. To get the darker tones, you would have to use a lot of gel paste, which will definitely make your buttercream taste like plastic. I’m not sure how plastic tastes, but I’m sure it has a similar taste. But with the powders, you will only have to use a small amount to get a darker color.

Darker colors are always much harder to achieve as opposed a lighter color. I highly recommend using powders to make darker colors because they will not change the taste of your buttercream. 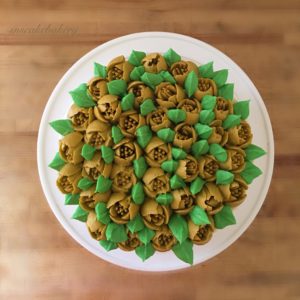 When coloring buttercream, it’s best to keep in mind that buttercream has a natural yellow tint and it actually doesn’t go away when you make buttercream. 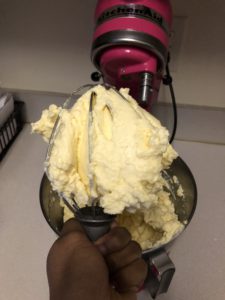 For example Swiss Buttercream has a deeper yellow tint and that can be a little difficult to color since it’s darker than most types of Buttercream. So when it comes to this particular buttercream, there’s nothing that you can do to avoid that tint, so its best to learn how to work with it to achieve your desired color.

Most bakers will use All Vegetable Shortening in their buttercream for a true white color. But at the same time, using too much shortening can alter the taste of your buttercream. I have actually tried making buttercream with only All Vegetable shortening and it had a very strange after taste. This was before I added any food coloring to it as well.

But one way to off set that taste is to add 2 teaspoons of salt an 1 cup of butter to the 1 cup of shortening. This will help your buttercream to have more of a buttery flavor while actually remaining white at the same time. It may not be hyper white as it would be with only using All vegetable shortening, but it will be like an ivory white color, which is still easy to color with gel paste or powdered food colorings.

Tip 9: Lighting can alter the color of buttercream

Having a poorly lit kitchen or workspace can affect the way you view the color of your buttercream. The color could look one way inside your home or workspace and then look different in tone when it’s delivered to the venue, specifically an outdoor venue that exposed to a lot of natural light. 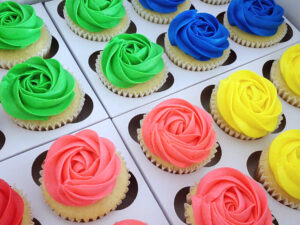 For example, I have always struggled with getting the color red darker in tone with buttercream and fondant. When I would mix the colors together and place the buttercream or fondant on the cake, it would look much darker in tone. But when it came to delivering the cake or cupcakes to the venue the color was totally different. 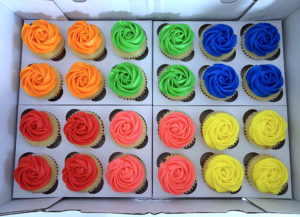 1 thought on “The Top 9 Tips To Color Buttercream.”